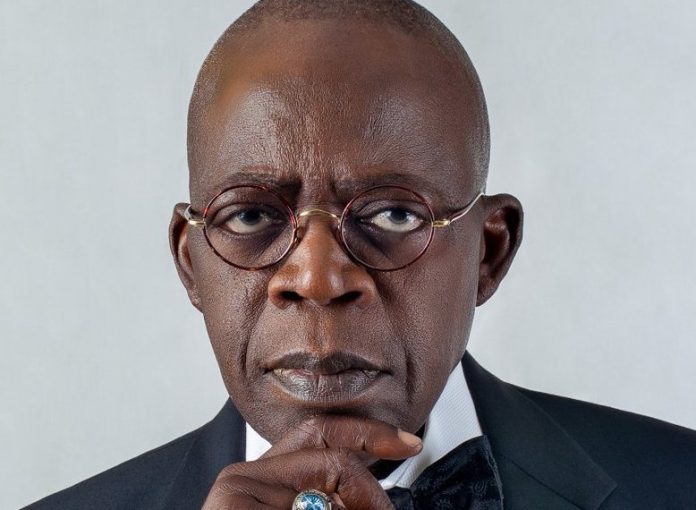 National Leader of All Progressives Congress, APC, Bola Tinubu, has hailed the incumbent Lagos State Governor, Mr Babajide Sanwo-Olu for laudable achievements and putting the state on the path to progress.

He, therefore, urged citizens to continue to keep faith in the APC. Tinubu made the remarks on Friday during the flag-off of the long-awaited 1.4 km dual carriageway flyover at Pen Cinema junction, Agege Local Government Area of the state.

The construction of the Agege-Pen Cinema bridge commenced in 2017, during the administration of the former governor Akinwumi Ambode. The flyover connects Agege to Iju-Ishaga and Lagos-Ota road.

The dignitaries at the ceremony, include Members Lagos State Executive Council, members of the state House of Assembly, the Chairman, the Caretaker Committee, the APC Lagos Chapter, the Chief Tunde Balogun, the Whitecap chiefs, traditional rulers, local government chairmen, APC chieftains, market leaders, among others.

Tinubu, addressing the mammoth crowd on the occasion, urged the youths to allow peace to reign in the country, saying no nation can develop in an atmosphere devoid of peace and harmony.

Also responding to Obasa description of him as a talent hunter, Tinubu said, “We are fishers of talents.

“We don’t destroy talents; we develop talents; we fish for them; we find them and give them the responsibility.

That’s what you find in Obasa, Sanwo-Olu, and Hamzat.” Tinubu also celebrated the emergence of Sanwo-Olu and his deputy Obafemi Hamzat.

He described Sanwo-Olu as the Captain of the “Ship of Our State”, adding that he has steered the ship in the right direction for progress, development, and good leadership.

He also commended Sanwo-Olu for being focused and for keeping the ship steady in stormy weathers. Tinubu said that Sanwo-Olu’s team had demonstrated unequalled determination to redevelop and rebuild the state which “has become one great construction site.”

“We thank this administration for not letting us down, we thank you for being who you are and who we think you are even before the election. “Ever since Babajide Sanwo-Olu became the captain of the ship of our state, he has turned it right for the progress and development of the state.

“Those of you at the cabinet has developed an equal determination to develop and rebuild for the people of Lagos state.” Tinubu stressed that the current administration is a team of” “great performers and doers”, who are capable of building Lagos back to progress.

According to him, “Every vote has a quality which should translate into passion, interest and conscience for development in the community.

Your vote has brought great development to your community and I urge you to continue to keep faith with the APC.’

He thanked all traditional rulers, white cap chiefs, party leaders, and market leaders, describing Hitech the contractor of the project as a very reliable company and a partner in the development of Lagos State and one that the state could always depend on.

Tinubu commended the youths in Agege for cooperating with the contractors and urged them to shun all act of restiveness and appreciate what the government is doing and not to be like vagabonds who destroy public utilities.

He said, “Don’t emulate those who are destroying public properties. There’s no development if there’s no peace. You must embrace peace to have development.” Speaking, Sanwo-Olu, said the commissioning of the bridge coincided with his 648 days in office, saying it is a big achievement for his administration.

The governor said the completion of the bridge was a promise fulfilled to residents as it would bring more economic benefits and faster travel time for the Agege environment and the state at large.

“We stand here with a lot of positive memories because we are here to deliver a landmark project.

The Agege Pen cinema bridge will bring growth to businesses and activities in the area will lead to progress and development of the state,” he said.

Sanwo-Olu, who urged residents to take ownership of the project, said the bridge was conceived to transmit vehicular traffic across the intersections at Agege.

He said the bridge would resolve the perennial gridlocks experienced in the area, with a positive impact on businesses.

Sanwo-Olu appreciated the contractors that handled the project, the Lagos State House of Assembly for cooperating with the government and other parties that saw to the completion of the bridge.

“When the bridge was under construction, it provided employment for 350 engineers, and thousands of artisans and a high number of unskilled labourers,” he said.

The state governor said the flyover bridge would bring more opportunities to Agege and environs and enhance further growth of the state. “Agege deserves more, we will go back and see how all of the infrastructures from Ojodu Berger, the road brings relief and bring positive development to this neighbourhood,” Sanwo-Olu added.

While thanking all stakeholders in the project, Sanwo-Olu said that: “We’ll make sure that Agege becomes a little London.” Obasa, told the gathering that he moved the motion in 2017 and it was supported by all lawmakers, and when he later became the Speaker, he championed the cause and pushed for the project to become a reality.

He also revealed that the APC government has tarred 50 streets in Agege. Obasa said the budget for the construction of the bridge was introduced and approved under his leadership, adding that they are ready to support the executive for the progress of Lagos state. Special Adviser to the Governor on Works and Infrastructure, Mrs Aramide Adeyoye, described the project as another infrastructure investment effort of Sanwo-Olu’s administration, in line with the THEMES agenda, to support businesses, promote economic development and ultimately improve the socio-economic well-being of residents.

Adeyoye said the project, which includes the rehabilitation of five adjoining roads, would resolve the traffic and transportation problem in the area.

She added that it would also change the skyline of the area.

She said, “The Pen Cinema intersection is one of the busiest in Lagos given its conflicts around the six major routes – Abule-Egba, Ogba, Agege, Oja, Iyana Ipaja and Iju.

This remained for a long time, being perennially clogged in gridlocks. The solution to this problem was conceived in September 2017 in the construction of a flyover across the Pen Cinema intersection, in addition to the spur linking Old Abeokuta Road.”

He commended Tinubu for laying the foundation for the project and hailed Sanwo-Olu for completing it.

Features of the flyover

The project consists of a 1.4km dual carriageway, flyover bridge component with two lanes of 3.65m width each in either direction with ramps, and rehabilitation of five adjoining roads.

The road component consists of service lanes on either side of the bridge with median, kerbs and walkways, complete with signalised traffic system, junction improvements with low emission diode (LED ) street lights.

The bridge spans across the intersections of Old Abeokuta Road, Railway Corridor and Iju-Isaga Road, and terminates near the entrance gate of Ijaiye Low-Cost Housing Estate on the Oba-Ogunji Road.

It is designed to convey traffic from Oba-Ogunji Road into Old Abeokuta Road, and towards Abule Egba through the ramp across the railway corridor. urges-nigerians/