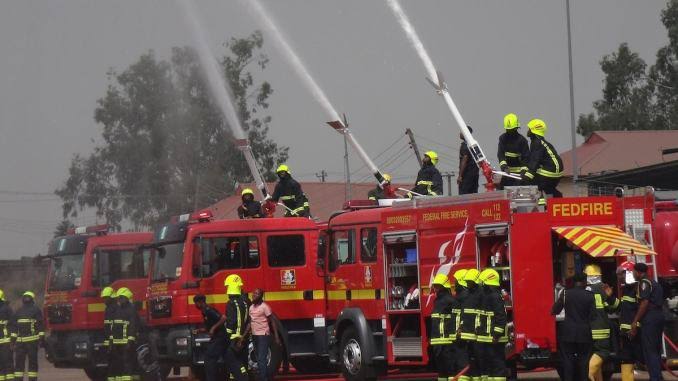 What would have been a total destruction in the popular Obiagu, a suburb of Enugu State capital was Wednesday night averted by the prompt intervention of the Enugu Fire.

The Fire Service which was abandoned by past administrations suddenly came back to life under Governor Ifeanyi Ugwuanyi.

With brand new vehicles and acquisition of modern fire fighting equipment the New Enugu Fire Service was able to avert a major fire disaster at the Ogbette Main Market on January 3, 2020.

Engr. Okwudiri Ohaa, Enugu Chief Fire Officer and his team stormed fire scene at the Council area of Obiagu with four fire vehicles to avert a complete disaster that would have rendered many families homeless.

The Obiagu fire is believed to have been caused by a female student who lit a candle in her room.

One thing reportedly led to another and the curtains caught fire leading to the explosion of a cooking gas in the room.

The rest they say is history as the flames went up uncontrollably until the arrival of the Enugu Fire Service.

Most of the buildings were very old buildings and in most cases the ceiling were made with sticks and woods thus the fire was quick to catch and wreck havoc before the arrival of the fire squad.

Fire Service was however able to put out the fire and also prevent it from spreading to nearby buildings which have little or no space between them.

One of the fire victims Izuchukwu Emmanuel Nkpukpu whose two electronics shops were burnt said he is yet to wale up from the dream.

The young trader who just returned from Dubai said he lost over N100 million in the inferno.

“All the LCD Televisions, and other electronics I just brought in are gone. please tell me it’s a dream.”

He called on Governor Ifeanyi Ugwuanyi to step in and help them as he has nothing Left. “I have to start afresh, but with what; from where,” he queried.

Everyday News reports that the humane governor of Enugu state Governor Ifeanyi Ugwuanyi is billed to visit the scene of the inferno with a view to assisting some of the victims.
ENDS