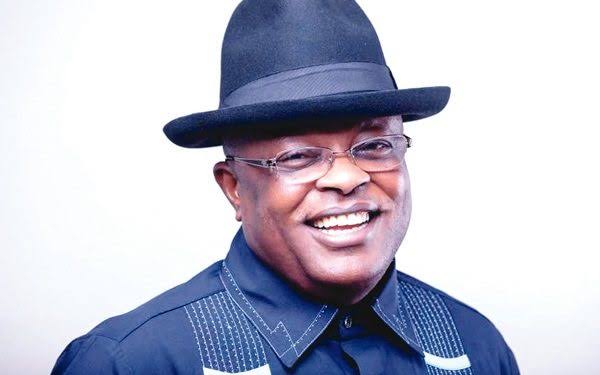 The Ebonyi State Governor, Chief David Umahi has expressed worry over the continued burning down of police stations in the state and urged the perpetrators to henceforth desist from engaging in such unpatriotic act.

Governor Umahi made the appeal during the Ebonyi State #ENDSARS 5 days Youth Summit with the theme Youth Engagement in National Development held at the Christian Ecumenical Center, Abakaliki.

Governor Umahi expressed regret over the destruction of police and other public facilities built by government to serve the people in the region by youth organizations and however tasked them to cease from further set of those facilities ablaze.

The governor, however promised to work with all youth groups in the region but on the condition that they must avert further killings of police officers and setting ablaze of police stations and public facilities built by government.

He said: “You must know that whatever you sow, you will reap. If you sow destruction or good you will reap it. You allow yourself to be used by politicians to destroy others, it is waiting for you to reap”.

“I was told that the most wicked people on earth are poor people, because in a small riots, they wants to destroy things.

“The organizers of Endsar protest has good intention but unfortunately some hoodlums along the line hijacked it. But we did exonerate our youths. What later happened was never their making. I commended our dear President Buhari who immediately yielded to the demands of the youths and disbanded the section of police called SARS, and today we don’t have SARS.

“Mr. President has gone ahead to give hands of fellowship to our youths and its all over the nation. The President has directed that a national program, that each state should organize youths

“Nobody wants to be kidnapped at the age of 70, 80 or 90 just because of insecurity. That’s why we want to hear you out. We want to take your future into your hands. We have set out N3 billions to empower the youths.

“I want to appeal to our youths, the south east governors are not against any youths organizations. We are not against the youths, we wants to work with you. But look at what happened at ENDASRS period, you are destroying the strategic infrastructure, what do you wants to achieve?”.

“You are burning down police stations, is not as if the hands of the police are tied but will it profit them to waste the blood of the youths?”.

“There are certain activities some youths engaged themselves which are unprofitable. And it is the major setback to your future. I will like the youths to stand up and protect the basic infrastructure for your future”. Ends.