We will restore peace in South East – Olumba Olumba Obu 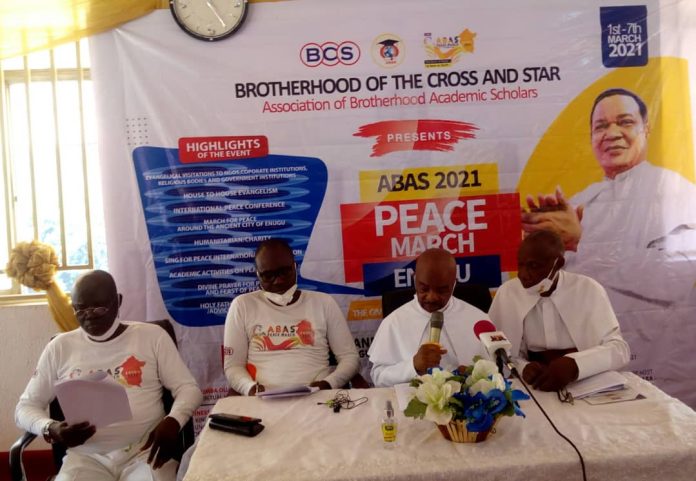 Following the alarming rate of insecurity in the country, Brotherhood of the Cross and Star, BCS,, has vowed to use the international peace march to restore peace in the South East zone.

The BCS, while calling for peace and unity in the country said that the peace march would drive away insecurity, kidnapping and all sort of crime and bring peace in the society.

The spokesman of BSC, Patriarch Christ Shepherd Edet Archibong during a press briefing in Enugu, said that the peace march with a theme, “The giver of peace is here on earth” which commenced on 1st of march would end on 7th with series of activities.

“With the menace of insurgency, kidnapping, armed robbery, tribal wars and host of other security concerns, most Nigerians including those in the south East are yearning for peace which will come from eradication of these societal challenges. The Enugu evangelical peace march which is focused on the south east states, is aimed at seeking the face of God to install peace in that part of the country.

“It is also intended to draw the attention of the people of the south east states to the fact that the giver of peace is physically Herr in Nigeria. Thus information of God’s physical presence in Nigeria is very important and should not be glossed over”, He said.

While urging South Easterners to embrace love as the teaching of God, said that the country is still experiencing insecurity because we don’t love each other.

According to him, if the leaders of south east states would turn to God and harken to His message of peace, the Igbo nation shall witness an era of lasting peace and prosperity such as has never been witnessed before.

“The way to do this is to practice the teachings on love brought by Holy spirit personified, leader Olumba Olumba Odu and to surrender all thrones and dominion for the owner of the world and giver of peace who has arrived in Igbo nation. Religious and ethnic bigotry, ethnic sentiment and discrimination should be done away with.

“They should have love for one another, there will be forgiveness and tolerance, no stealing, no kidnapping, no defrauding, no killing, no embezzlement of fund and no favoritism, in fact all vices will disappear. When these is done, peace and prosperity will be restored to the Igbo nation”, He said.