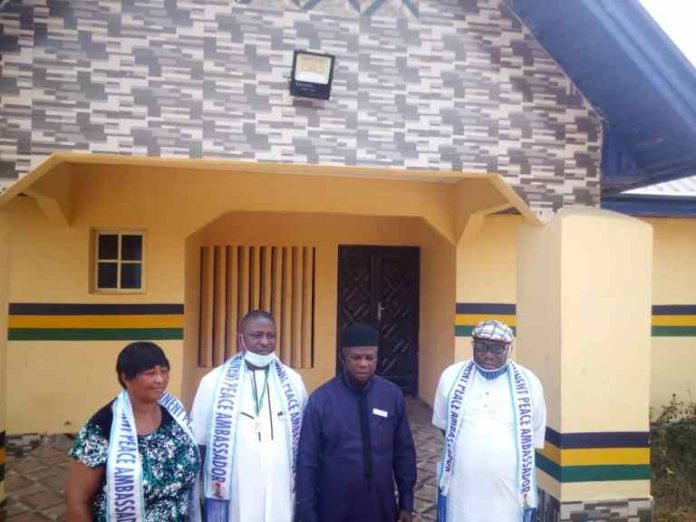 Speaking at the ultramodern police station while conducting members of the United Nations World Peace Advocates round the station, Monday in Bendeghe community Ofuka stated that the station is 100 percent complete stressing that the adjourning accommodation is in an advanced state of completion.

Ayade’s aide maintained that the police station which comprises 12 rooms with double cell, DPO OffceraDe, toilets, water supply as well as an adjourning accomodation for personnel would aide the police fight criminality in the community.

Ofuka stated that the community has been experiencing rising insecurity over time and the station will change the security situation in the community and afford cocoa farmers the needed peace to boost their productivity.

In his words, Ofuaka stated, “Bendeghe – Ekim, has been a security flashpoint and people die everytime.

“The only police station we had in the community was bastardized and burnt down completely.

“So this is done to bring down the presence of police to this area because cultism and social vices have increased.

“By the time this is commissioned security will improved, our cocoa farmers can boost their productivity and real development can take place.

“Cocoa farmers will have opportunity to do their business with ease, nobody will terrorize then at the plantation because they can easily rush down here for security.

“This will be my humble donation to Nigeria as a whole and not just Bendeghe Ekim and Cross River because people that would have died tomorrow will be protected by the security men who will be sent here”, he said.

Reacting, Ambassador Jefferson while commending Ayade’s aide states that donating a police station to Nigeria police command would assist the the police command do more in the area of crime fighting to reduce the rate of insecurity in the community and described Oscar’s initiative aa a good step in the right direction.

“Security its yearning for attention of everyone in this country and very important.

“This project will help in bringing government closer to the people and reduce the bad stories we hear from this community”, Jefferson maintained.