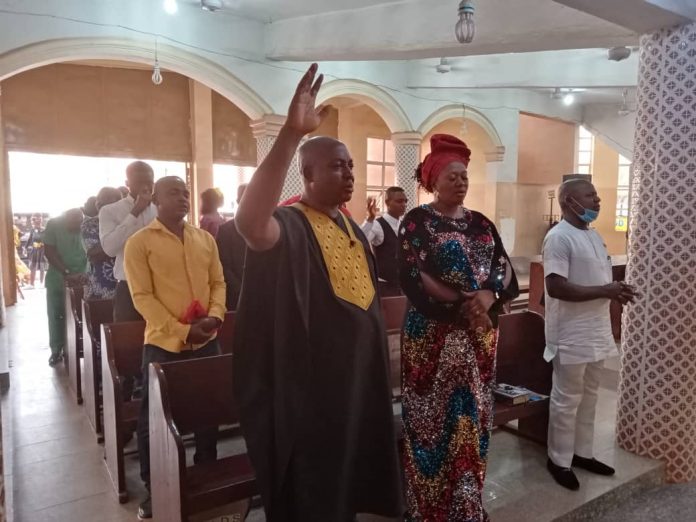 It is said that the greatest gift a man can give to his maker, God Almighty our creator is the gift of Thanksgiving, praise and worship.

Ononaenyi JP and family arrived to the Church at about 10:15 am for the Thanksgiving service. Before his arrival, different groups who came for him were already waiting, such as Ononaenyi support group, Nkanu East LGA PDP Women wing in their gorgeous attire, Ononaenyi Media Team, Nkanu East Restoration Movement,, . NYA, Owo Intergrity group, Global Citizens Forum, etc.

The Church service commenced at about 10: 30 am with songs of worship and later proceeds to praises and after which the word of God as sermon of the day was preached.

Ononaenyi and his family members were accompanied by his Colleagues, Friends and Allies with his materials of Thanksgiving and offering to the altar where they were laid and offered to the glory of God.

At this point, a brief testimony was said by Ononaenyi’s wife who were full of praises to God Almighty for sparing the life of her husband when his health challenge was sever and frightening. Among other things she said on the mercy and love of God towards his family, she returned all praises to God and all those God used in restoring her husband’s health

In his own remarks Hon Nnajiofor Ononaenyi himself narrated his frighetening experience and encounter with Death in 7 weeks. “, I am so glad, delighted and thankful to God Almighty for miraculously sparing my life that I am standing on my feet today even here at the altar of the Mighty one to offer my sacrifice of praise to God Almighty who stood by me to conquer Mr. death when it came to take me away”. He went further to narrate the pains he went through from late year November 2020 to January 2021, how some growths in the Lumbasacral region of his body just that came from no where and almost killed him.. Explaining further that the growths almost paralyzed his legs hence the Peri anal surgeries after moving from one hosital to another.

He said that it got a point on one horrifying night that he saw Mr. Death eye ball to eye and death was dragging him but he courageously even unconsciously rebuked death to leave him alone for he is not yet ready to die as he has a lot of assignments yet unfulfilled. According to him, “at some point my children were asking me, daddy do you want to die? Please daddy don’t die please”. He enumerated the number of Pastors that went into chain fasting and praying sessions for his full recovery. He concluded by saying that his full recovery is miraculously divine as God ministered to him that he is saving him for him to continue the good humaniterian works of supporting the less privileged in his Constituency, the widows and the poorest of the poor as he has been doing since he was given the people’s mandate to represent and serve them in Enugu State House of Assembly. He Ononaenyi called on others who are holding public offices on behalf of the people to give back to the people in whose mandate they are where they are today. He promised to continue to do the assignment of serving humanity with whatever blessing God bestows on him

He appreciated his wife, family, Colleagues doctors, Pastors, and prayer partners God used to restore his health. Ononaenyi poured showers of praise on the Governor of Enugu State Rt. Hon. Ifeanyi Lawrence Ugwuanyi for his concern, support and encouragement which also played a vital role in his full recovery, and secondly, Ugwuanyi’s leadership strides at all fronts in Enugu State. He also appreciated his immediate Boss, the Speaker Enugu State House of Assembly, Rt. Hon. Chief. Edward Ubosi aka Ozege for his, concern, support, Solidarity and
prayers during his health challenge and other times.

He appreciated all his colleagues for being there for him all through his health ordeal.

Thanksgiving Train moved straight to Ononaenyi’s home at GRA where people were treated with varieties of food, drinks, gift items in a well organised and massvely attended reception.

tI is important to note that more than fifteen (15) of political, social cultural, and Faith based Christian groups including the Men, s Ministeries of his Church AGC were in attendance of this Thanksgiving program organized by the People’s Leader, Ononaenyi of Nkanu Land in appreciation of God’s unconditional love in sparing his life.