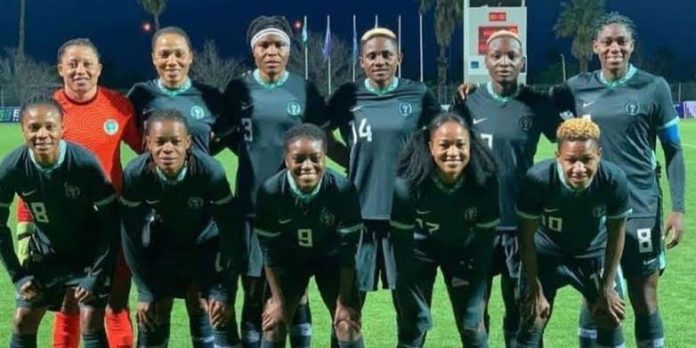 Nigeria’s Super Falcons on Tuesday made history to be the first African winners of the invitational Turkish Women’s Cup in Antalya.

Super Falcons’ triumph was a historic one after thrashing Equatorial Guinea 9-0 to claim a third successive victory in the competition.

The African champions won all three games at the competition. Super Falcons defeated CSKA Moscow female team and Uzbekistan women national 1-0 each and before pummeling the Nzalang of Equatorial Guinea 9-0 in the final game.

Barcelona striker Asisat Oshoala was the star of the final game as she scored four goals – a first-half hattrick – to bury the hopes of their African counterparts.

Ugonna Kanu put Nigeria ahead after eight minutes before the captain Oshoala made it 2-0 from the penalty spot when Toni Payne was fouled inside the box in the 11th minute.

Oshoala, the reigning African Women’s Footballer of the Year, netted her brace two minutes later from another penalty kick.

The Barcelona Ladies star completed her hat-trick in the 26th minute when she beat the Guinean’s offside trap and rounded the goalkeeper to score.

Payne provided the assist for Uchenna Kanu to make it 5-0 after 36 minutes.

Charity Adule scored with a header in the 38th minute and Payne then net her first goal for Nigeria two minutes from the break.

Debutant and FC Robo skipper Monday Gift made it 8-0 on 69 minutes. Oshoala grabbed her fourth goal of the day in the 85th minute for the Falcons to win 9-0

Equatorial Guinea’s misery was completed when a player was sent off soon after for dangerous play against debutant Ramat Abdulkareem.